First instars of crickets ( pinhead crickets / micro crickets) are staple food for every dartfrog species in captivity. Although there exist breeders, who feed their frogs only with fruitflies, but for healthy and good development of young froglets are crickets essential part of the diet. We found common house crickets (Acheta domestica) and tropical house crickets (Gryllodes sigillatus) as the best species used for dartfrogs. We dont use the Jamaicans field cricket (Gryllus assimilis) so much, because it have higher demands on stabile incubation temperature (29°C-32°C), they are having less ootecas (eggs) and if being feeded so frequently, the frogs are not taking them so gladly. They grow fast and they are a bit harder to swallow, which may discourage some frogs. The two spotted black field cricket (Gryllus bimaculatus) posses the same disadvantages, and moreover its said to be a bit stinky, what make frogs dont like them. Gryllodes sigillatus are great food stock, but they have serious disadvantage – they are very resistable and able to breed in very low temperatures. So when they escape, the plague infestation of frogroom or whole building (especially in warmer regions or if the house is equipped with central heating system)is very probable. Common house cricket is in comparation almost impossible to breed in house condition of temperate regions (like central Europe). If we will feed the frogs with small pinheads, we dont have to fear, that they escape and grow into adult stage and start to chirp. When (there is no “If” just “when”) they escape, they will live barely for a week, until they starve to death or dry-out.

There is usually no reason for breeding crickets from the “egg” to the adult stage. For dartfrogs, we need crickets from size, when they pop-up from the ooteca, until the size of about 5mm. So the “pinhead crickets” in age of about 14 days are the oldest, which we can feed to the biggest frogs, like adult tinctorius or so. And even them prefere the smaller piheads in body size of about 3mm. So we dont have to run the whole population of crickets, but there is enough and easiest way to buy supply od adult crickets every couple of week or so. Some insect farms are also selling the mixed sizes crickets, which are usually cheaper than adults and lasts longer. For breeding of crickets there is neccesary to control the temperatures and humidity. The adults are being kept in lower humidity (around 20-40%) but especially the Gryllodes sigillatus are very adaptable to higher humidity levels. Freshly hatched crickets needs a bit higher humidity (60-80%).The temperatures for breeding and hatching differs, for the Gryllodes sigillatus and Acheta domestica crickets the temperatures from 26-28°C are sufficient for living and breeding. They are able to breed even in lower temperatures, but the productivity is decreasing. If we use higher temperatures, the lifetime of adult crickets is getting shorter. For the Jamaican field crickets the higher temperatures are necessary. We should keep temperatures at least around 28°C because otherwise the ootecas are hatching badly. For the incubation of ootecas of the common house crickets and tropical house crickets we prefere temperatures between 32-34°C. Evolving takes shorter time and the crickets which are hatching are a bit smaller, so we can feed them to freshly metamorphized dendrobates frogs or Ranitomeyas and Oophagas of 14 days old. 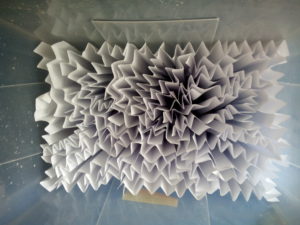 . There is a large ventilation hole in the covering lid, usually takes about 80% of surface of the lid and we glue the metallic insect screen mesh into with aquarium silicone. We can cut the same ventillation holes from the side of the box to improve ventillation. If we have colder conditions in the room, we can place whole box on the terrarium heating pad. We can insulate the whole plastic box with styrofoam, to increase the effect of heating pad, but beware of overheating and safeness of whole construction.

As the material on which crickets live on, we used the egg-crates or the sheets of paper which are compounded into “accordeon” shape. Important is vertical orientation of the material, which is necessary for the easy cleaning of the box. The excrements are falling down directly on the floor, where we can easily dab them off to one corner and remove them. As the egg depositor, 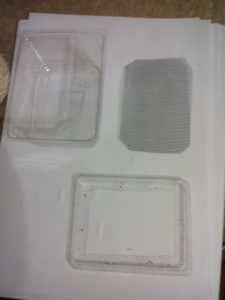 we use small plastic boxes with lid, in which is a hole as big as possible. When the box is filled with substrate, its covered with metalic mesh and this mesh is fixed with covering lid. Crickets can then put their ovopositor through the mesh into the substrate, but they cant dig into the substrate or eat the eggs. We keep the egg depositor box for about two days in the cricket bin. Longer exposure will attract more mites and the crickets will break old ootecas when they try to lay new eggs.  Then we remove lid, mesh and we will put the egg depositor into incubation styrofoam box, where temperatures are being held around 31-33°C. If the adult crickets have permanent acces to the egg depository, their longivity is decreased rapidly. If we observe, that the cricket females are being a bit “skinny” , we put at least one day pause between adding fresh egg depository.  At temperatures around 32°C it takes about 12 days to start hatching of Acheta domestica or 10 days to hatch Gryllus assimilis . Hatching of Gryllodes sigillatus takes a bit more. We can feed them directly to the frogs, but better is at least to gut-load them before. It is favorable for bigger frogs to let the freshly hatched crickets grow a little for couple of days. As they grow up, we will have more food for our frogs and aswell the content of their stomach will grow, which made it easier to gut-load more important food which will benefit to the alimentanion of our frogs.